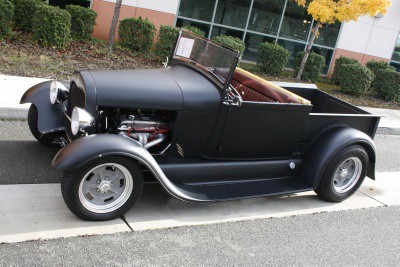 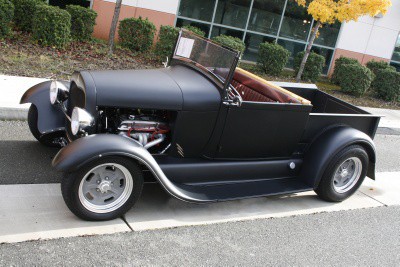 This Custom Model A Roadster is truly unique and won't last long! It features a 327 CID V8, 700 R4 Automatic Transmission with Lokar shifter, 5,024 Miles on Rebuilt Engine, Power Front Disc Brakes, Photos & Receipts. Too many upgrades to list! Be sure to check out our cool piece of automotive history! Located at our Benicia Showroom 707.748.4000. For our entire inventory go to www.specialtysales.com

The Ford Model A of 19271931 (also colloquially called the A-Model Ford or the A, and A-bone among rodders and customizers[1]) was the second huge success for the Ford Motor Company, after its predecessor, the Model T. First produced on October 20, 1927, but not sold until December 2, it replaced the venerable Model T, which had been produced for 18 years. This new Model A (a previous model had used the Model A name back in 19031904) was designated as a 1927 model and was available in four standard colors, but not black.

The Model A was the first Ford to use the standard set of driver controls with conventional clutch and brake pedals; throttle and gearshift. Previous Ford models used controls that had become out of date and uncommon to drivers of other makes. The Model A's fuel tank was located in the cowl, between the engine compartment's fire wall and the dash panel. It had an optic fuel gauge and the fuel was distributed to the carburetor by gravity. In cooler climates, owners could purchase an aftermarket cast iron unit to place over the engine's exhaust manifold to bring heated air into the cab. A small door could be opened or closed to adjust the amount of hot air entering the cab. Model A was the first car to have safety glass in the windshield.

This Custom Model A Roadster is truly unique and won't last long! Be sure to check out our cool piece of automotive history!

Please note that because the amount you offered was below the full Asking Price of $34,990, this offer will be considered but it is NOT guaranteed to be accepted, nor will it take precedence over other offers and you risk losing your opportunity to purchase this vehicle.